The 9/12 Project: An Open Letter From Glenn Beck With A Note of Thanks and Commitment From Me 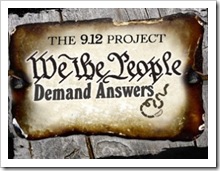 I have reprinted below an open letter from Glenn Beck to all Americans. Along with it goes my endorsement, enthusiasm and unrepentant support for the 9/12 Project, as well as my tremendous thanks to Glenn Beck for spearheading this effort.

Glenn is one of the most decent, most patriotic Americans I know. Glenn has been tirelessly trying to protect the United States and its constitution. A man working to protect the Constitution should be a threat to no one. Quite interestingly, the left attacks him personally at every opportunity.

Thank you, Glenn Beck, you’re a good man and a great American. I am proud of you. Please be careful, as they don’t have a single argument left for you. For my part, I am with you and commit to the Refounding of America in any way I can possibly help.

What an amazing few days on the road this has been. Your spirits have been high, your faith strong and your spine unbendable. I ended my multi-day book tour at The Villages with what had been billed as a rally but could be better described as a candid citizen-to-citizen chat.

Today, I have stopped looking for a leader to show us the way out because I have come to realize that the only one who can truly save our country… is us. To change America’s course we need to change ourselves, our expectations and our willingness to accept the unacceptable. When we refuse to allow our children to receive a trophy for participation, we are on the road to restoring the meaning of merit in our Republic. When we insist that no one is too big to fail, we will be able to learn from our mistakes, and when we demand that we are self-reliant, we will ensure that others can rely on us, not the government.

There is much to do, much to learn and time is of the essence. While I will be explaining the entire Plan over the coming weeks and months, I did want to give you a preview of some of the highlights:

Education is key, and not just for our children. To that end, we will be conducting a series of conventions. These will be full-day experiences where you will be immersed in learning about topics ranging from self-reliance, community organizing, the economy and how to be a political force in your own neighborhood and country. The first one will be in Orlando at UCF Arena on March 27th. You will also be able to vote to have a convention in your region by clicking here.

I have begun meeting with some of the best minds in the country that believe in limited government, maximum freedom and the values of our Founders. I am developing a 100 year plan. I know that the bipartisan corruption in Washington that has brought us to this brink and it will not be defeated easily. It will require unconventional thinking and a radical plan to restore our nation to the maximum freedoms we were supposed to have been protecting, using only the battlefield of ideas.

All of the above will culminate in The Plan, a book that will provide specific policies, principles and, most importantly, action steps that each of us can take to play a role in this Refounding.

On August 28, 2010, I ask you, your family and neighbors to join me at the feet of Abraham Lincoln on the National Mall for the unveiling of The Plan and the birthday of a new national movement to restore our great country.