Given the difficulty of trending the home building market, it’s only fitting that the five experts we asked for the first five housing markets to recover picked an ersatz grab-bag of markets from the Great Plains, the Deep South, and even the Industrial Midwest. There’s something for nearly every builder in here.

That said, the esteemed prognosticators managed to agree on a few early bloomers. Several were bullish on Washington DC, where federal spending is likely to boost employment in the short run, and Dallas, an affordable market that continues to churn out good jobs.

The experts steered clear of bubble markets, for the most part, with the exception of one analyst who  thought Sacramento would come back early since it dropped early. They looked for homes to industries—medical, energy, biotech–that are likely to benefit from stimulus or government spending. And they carefully considered whether home pricing in a market had “corrected.”

While several of the selected markets showed up on our list of The Healthiest Housing Markets for 2009, published two months ago, others were conspicuously absent. Top-ranked Houston, for instance, which appears to be going through a correction, didn’t make anyone’s list of the first to rebound.

John Burns always seems to be step ahead of the pack when it comes to forecasting the housing market, especially local demand. Among the first analysts to write that a major price correction was necessary before the market would rebound, Burns has since developed a local market forecasting tool.

Dubbed Housing Cycle GPA, the analytical model considers 29 years of history to determine a local market’s health. The primary drivers are local demand, supply, and affordability, along with what’s happening in the national economy. When two of the three local fundamentals rise, that usually means price appreciation is likely to occur, sometimes immediately, in other cases, over several years. 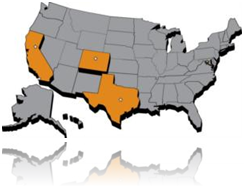 We asked the analysts at John Burns Associates to use the model to determine which five major home building markets might recover first. They produced a list that includes some metro areas with strong job formation, others where home builder competition is almost nil, and still others where price declines have made homes quite affordable.

1. Washington, DC Burns’ bullishness on this market boils down to a single word—jobs. “If a sector will be hiring, it will be the Federal government,” he says. D.C. was also among the first markets to have a price correction. “Within a reasonable commute of the Capitol, homes have become very affordable and supply is constrained.”

2. San Diego, California “Most of the home builders and speculators have left town, and left a very supply-constrained market behind. The biotechnology sector is likely to lead an economic recovery that will be characterized by great affordability (by San Diego standards) and a lack of supply.”

3. Sacramento, California  “Although we expect housing demand in Sacramento to remain low due to state fiscal issues, much of the excess supply in both new and resale homes has been cleared out, and affordability is fantastic.”

4. Dallas, Texas “Assuming mortgage rates remain low and GSE lending doesn’t change, Dallas’ housing market should stabilize due to increased demand from people relocating from the west to one of the most affordable markets in the country. North Dallas should recover long before South Dallas.”

5. Denver, Colorado  “One of the best places to live in the country, Denver was just recovering from the telecom bust when it got hit by the national economic downturn as well. Housing is extremely affordable and foreclosure activity, which used to lead the country, is now much lower than most other areas of the country.”

Common sense Reagan conservative, husband, father and fiercely patriotic American who is passionately opposed to Barack Obama and his progressive agenda. The fundamentally dishonest, inherently evil policies of Obama and Democratic Party have been forced on America. Completely absent has been the promised transparency, because these progressives know that their positions cannot survive the light of day. I'm also a life-long Republican turned Tea Party Patriot because the Republican Party strayed from its roots, too far to the left. Ronald Reagan was the greatest President in American history, and it's clear that America needs Ronald Reagan 2.0 now more than ever. View all posts by Scott Schaefer